The role of PNI in Natural Capital

Earlier this month I ran a PNI-based workshop at the Valuing our Life Support Systems Summit #VOLSS at the British Library in London.

The summit, hosted by the Natural Capital Initiative (NCI), brought together 250 scientists, policy makers and business representatives to debate how we can better preserve the elements of nature on which human society and the economy depend.

Knowing that we (Sarah Chimbwandira, director at Surrey Wildlife Trust and myself) had less than an hour in total, we designed the session to maximise the participative elements. I trimmed out my introduction entirely, saying they “could find out more about me on-line if they so wished”.

Our promotion of the session via a pre-conference blog by Sarah on ‘Natural Capital needs relevant stories to be told as well as good science‘, together with mentions on Twitter and at previous sessions meant that we were oversubscribed, which was exactly what we wanted.

A very brief overview of the excellent progress so far of Surrey Connects, by Mark Pearson the CEO, set the scene and we were off with hand-cut hexagons and sharpies (other marker pens are available).

The participants were invited to capture their thoughts and feelings about the current state of ‘Natural Capital’ and then, in reverse (to disrupt linear thinking) they were asked to complete a hexagon for each of the key decisions, events and turning points that had led us to where we are today.

I ran around the tables to encourage participation and keep the energy and progress as high as possible.

Next they were asked to “imagine in two years, if everything that could go right (in relation to the adoption of Natural Capital), does go right. What would that look like? What might be the decisions and events that might need to happen?” I added that “the first step might be the most important to focus upon”.

Quickly moving on, nominated storytellers told the story of their table to two, separately, visiting groups in around five minutes each. 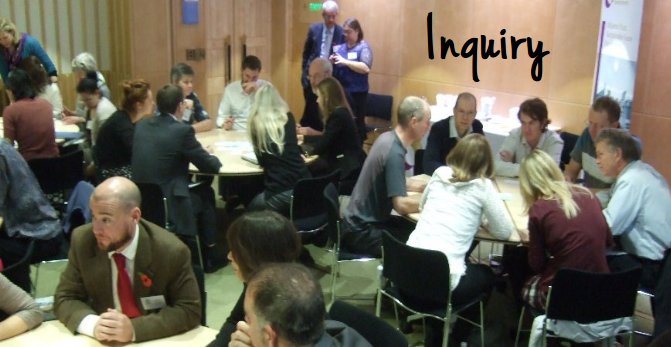 Finally and perhaps most importantly of all they were invited to reflect upon the similarities, differences and surprises between their own story and the two new versions they had heard.

The overall view was that the stories were fairly similar (not really surprising as this was half way through day two of the conference) but that they differed considerably on perspective ie economics, natural environment and business – focus.

A quick comparison of the ‘first (important) step’ suggested by each of the six groups reveals:

What do you think? I think this is a good set of first steps to ensure the ‘Natural Capital’ approach proceeds with caution and is adaptable and resilient in the face of uncertainty.

Feedback was hugely positive. Cheat sheets were eagerly taken away.

My reflections afterwards were that:

If you are interested, my full report on the session, complete with every hexagon, is available on the Natural Capital Initiative website. We hope to be doing a lot more in this hugely exciting area in the coming months, so watch this space.

Have you had any involvement with Natural Capital/ Ecosystem Services projects or any interesting related stories? If so we would love to hear from you.