Comparison of NarraFirma with other platforms for PNI/Sensemaking 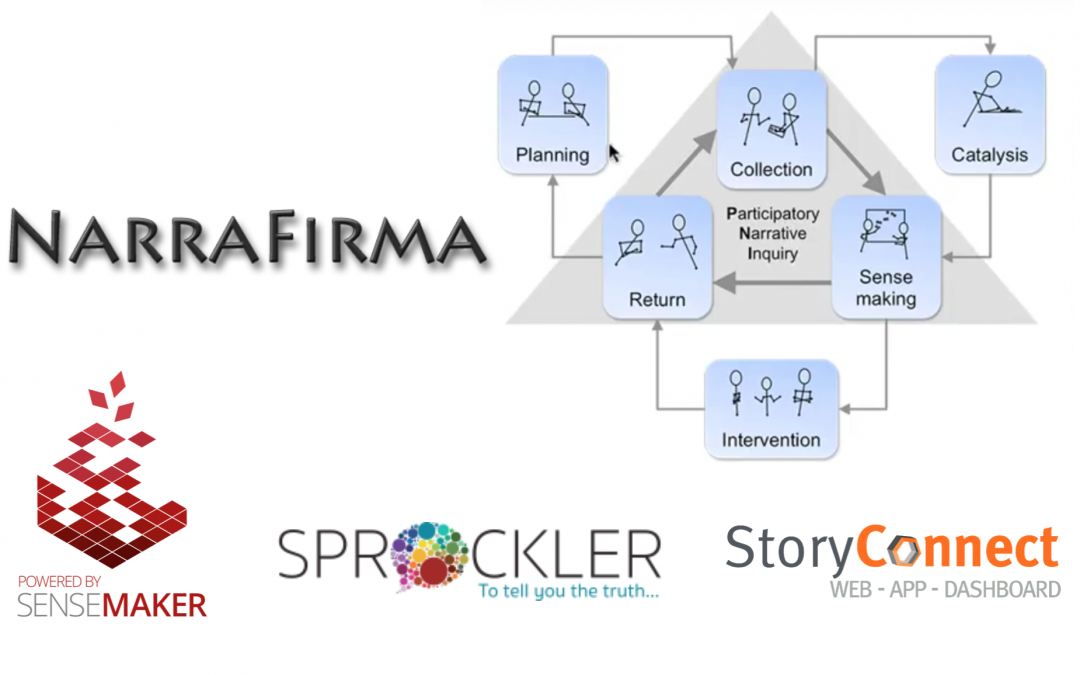 One of the goals of the PNI Institute is to exchange knowledge on the PNI process and the tools used to carry out PNI projects. Last week StoryConnect seized the opportunity of the arrival of NarraFirma to complete a comparison of the four PNI toolsets currently available. So this is a crosspost. Happy reading!

Last week saw the arrival of NarraFirma.com, a single-page webApp to support PNI projects. NarraFirma is developed by Cynthia Kurtz (author of Working With Stories) and her husband Paul Fernhout.

The release of NarraFirma means there are now 4 distinct integrated digital platforms for Participatory Narrative Inquiry (PNI), also known as Narrative Sensemaking. This blog post is a reflection upon some of the history of the development of these tools, and ends with a comparison of the 4 platforms – which is very much a work-in-progress and open to your additional information and comment.

It is perfectly possible to conduct PNI/Sensemaking without digital tools. And there are abundant standard survey platforms with at least basic capability to digitally support collection of Stories and asking questions about them. But well-integrated digital suites of tools for collecting and working with stories are customised for purpose. They are accordingly faster to implement, lower risk, require less custom programming by the end user, and are thus much more likely to lead to a successful PNI project.

A few more words on history

Actually it is a bit of an injustice to call NarraFirma the 4th platform as the makers have probably the longest and richest history in creating tools for StoryWork. Here Cynthia explains that NarraFirma is the 10th digital tool she created with the occasional help of Paul. Earlier she released tools for story-annotation (2000),  juxtaposition (2001), mass narrative representation (2002), story-based collaboration (2005), simulation (2006), constructs – later called Sensemaker Modeller (2007), the first 3 versions of SenseMaker (2007 to 2009), and finally Narracat for catalysis-support (2009, released 2011). So the track record in this field is certainly impressive.

When I first started working with narratives (from semi-structured-interviews) in 2003 I used LimeSurvey (which had just been renamed from PHPsurveyor). In 2005, when I attended a Cognitive-Edge course, we were shown images of what looked to me like an MS-DOS based narrative database (also called  the oral history database prototype) and the system for mass narrative representation mentioned above. I recently learned they were actually WxWindows based, but – to be honest – that level of historical technical detail is beyond me.

In 2007 the first versions of Cognitive-Edge’s SenseMaker arrived (following earlier alpha projects as you can read here). The early versions of SenseMaker were quite feature rich, but tended to crash in non-reproducible ways. It took us a while to figure out that the “CFK” comments in the the error messages stood for Cynthia F. Kurtz – who we knew primarily at that time as the lead author of the 2003 IBM Systems Journal article on Narrative Sensemaking. It took even longer to learn that “PDF” stood for Paul Fernhout.

As the number of people with experience in the PNI field was – and to some extent still is – rather small, I continued to follow Cynthia, at first mainly through her blog Story Colored Glasses and later in person also.  This is how I ran into NarraCat. This must have been 2012. NarraCat was very rich in functionality and looked very interesting, but turned out to be too hard for me to install and run and I never used it on a serious project.

Later in 2012 operational challenges with SenseMaker forced us at StoryConnect to increase the usage of LimeSurvey in our business. So after some hours of CSS styling, plus adding a few lines of javascript, we started using LimeSurvey again to collect stories and ask questions about them. For visualisation and statistics we adopted Tableau, SPSS and R – all connecting directly with the mySQL database under LimeSurvey. Over time we improved the styling and user-interaction, developed connecting protocols between LimeSurvey, Tableau and the StoryConnect App so that all functions are now pretty well integrated (although we never seem to have a shortage of new functionality to tighten the integration).

We named the whole suite StoryConnect and hence the StoryConnect PNI tools were born. Maybe tools is not the right word as we don’t sell them – instead we offer them as software-as-a-service to anyone who needs reliability, repeatability, continuity and/or scale for StoryWork.

With the arrival of Cynthia’s magnum-opus Working with Stories last year another landmark was reached in the PNI/Sensemaking world. The first PNI textbook is now in use by many in the field and is having a profound connecting and language-setting effect.

Earlier this year the 3rd platform arrived: Sprockler. Developed by Perspectivity it is fully web-based and offers designer, collector and analyser modules. More on this functionality later in this post.

Last summer we at StoryConnect had the honour and pleasure to work with the alpha version of NarraFirma on one of our projects and overall we loved it. Of course there were the usual hiccups and suggestions, but these seem to be taken into account in the current beta release.

However, NarraFirma, SenseMaker, Sprockler and StoryConnect are all quite different from each other. So with the arrival of the NarraFirma beta last week, we felt the urge to finish a comparison effort we had started earlier. This blog is the result of that comparison. Comparing always means making choices about what to include in the comparison and what not. We have opted to do a comparison on main characteristics and some PNI specific things that we think are useful to compare. We are fully open to suggestions to add other items in the comparison tables.

All the platforms offer the basic functionality found in any commercial or FOSS survey tool. PNI/Sensemaking has a few specific distinguishing functionalities. Some of those, such as support for paper-based StoryGathering, are also largely identical with the commercial and FOSS survey tools, but may make a huge difference when selecting the best platform for a specific project.

Support for PNI project activities and the PNI process

As the term PNI is used more and more lately, its useful and helpful to provide an overview of the support the platforms offer for the various PNI phases. The benchmark here is NarraFirma as it the only one that offers process support for all phases (as in fact it is the Working with Stories book in software) and it offers support for project activities.

In the table below we list which platforms offer process and project support per PNI Phase. For example, does the platform offer the automatic generation of StoryCards in sensemaking sessions; or, does it support systematic flipping through combinations of question data in the catalysis phase.

Some platform’s organisations offer pre-configured solutions and others more or less freely share experience and solutions in their partner ecology.

It is not our job to recommend or rank these PNI platforms. Here we will only highlight some differences. In general your first choice is between a proprietary or open source platform. Maybe as a customer that doesn’t matter that much, but as a PNI/Sensemaking practitioner the control you have over the software, the ability to fix small problems or develop extensions, and the say you have in the further development of the tools might make a huge difference.

The next choice might be if you need mobile collection and/or evaluation. Apps make a big difference today and as the percentage of mobile traffic steadily increases, support for mobile access to the front- and back-end seems a factor to consider.

On the functionality front, the differences in the basic functionality are minor. The only exception is the lack of support for tripolars (triads) by NarraFirma. For novices this might even be a plus, for more advanced practitioners this might be a show stopper. But Cynthia left tripolars (triads) out of NarraFirma for a reason: she has tried them and found them to be useless and even damaging to story projects. We at StoryConnect use them sparingly and with lots of care. It’s an dangerous instrument whose power can easily turn against you.

The real differences here are in project and respondent support. GPS data, workflow support (out of the box, without coding), support for repeated participation, support for paper-based collection and sensemaking, etc. We only suggest that you study the differences well before making your choices.

On the PNI project support side, things are very very clear. NarraFirma is by far the leading platform as it offers built-in support to run PNI projects from start to finish and offers many handy features to produce materials for project activities. The former is only balanced by the offering of SCAN solutions by Cognitive Edge and Connect solutions by StoryConnect. And many independent practitioners offer their own solutions as well – just not yet as widely publicized as our 4 PNI platforms. Here the PNI Institute – founded by the people behind NarraFirma, those behind StoryConnect, and plus other PNI-focussed organisations – plays a role too.

With respect to support for project activities, the StoryConnect Dashboards seem to be closest to what NarraFirma offers for Catalysis, Sensemaking and Return phases. When it comes to offering support for continuous PNI – a.k.a. PNI4, we feel we at StoryConnect are a bit ahead of the pack. This is mainly because StoryConnect dashboards can support continuous (real-time) and distributed catalysis, sensemaking, intervention and return.

We hope this short comparison helps you in choosing the PNI platform that suits you best. We are pretty sure the comparison is incomplete and far from perfect, if only for the fact that several things are currently unknown to us. You are more than welcome to help improve or correct this comparison by leaving comments and suggestions below. Wouldn’t it be great if one day a comparison like this is available at Wikipedia?