A provenance into Participatory Narrative

A famous Indian saying states that it is impossible to step into the same river twice. The idea behind the saying is that the river changes all the time. In the same vein it’s hard for me to say when my journey into PNI began because there are so many things that contributed to it, but I’ll try nevertheless.

Some chemistry in the mix

I guess it all started in the fall of 1986, my 2nd year of studying chemistry at Utrecht University, when I first encountered the notion of emergence. I was introduced to the theories of quantum chemistry that enable you to calculate properties of atoms and molecules from first principles. Unlike the old Bohr theories of the atom, here the resulting coordinates and energies cannot be predicted but have to be simulated in an iterative fashion resulting in set of properties that can truly be called emergent. The event brought back a memory from my high school years. It must have been June 1984, near the end of the 5th year on the Dutch equivalent of high-school, when I told my chemistry teacher I had chosen to study chemistry after graduation. He went silent for a few seconds and said:

Well Harold, if you do, please forget – after your final exams – anything I teach you next year, because all models and theories you learned are incomplete, superseded or even dead wrong.

Of course he was right, but still I chose not to forget the old theory, but to store the new one in parallel. 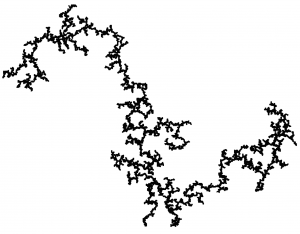 Simulated fractal aggregate with emergent properties. These structure a both a model for chemical networks that appear in nature and communication of knowledge in organisations and communities.

Years later, in 1995 I obtained a PhD in chemistry on simulating emergent properties of naturally occurring silica gels and their transformation in solution using agent-based computer models. During this work several sideline projects had been done, including one of finding out how quickly a message could propagate on the fractal network we simulated and visualized. Today these simulations would be stored under the category of Social Network Analysis, but then it was just an experiment.

The agents become humans, swimmers in the water

One might ask what all  this has to do with narrative. Well another five years later I worked in the research department of Océ on document/records management and innovation of document services. We used a lot of participatory research methods to study what users were doing with printer and copying machines and in manned business services (read outsourced Reprographics and Archiving departments). On the technical side I also had many colleagues working on automating document analysis. Of course the latter attempts failed and still fail miserably today, which is simple to understand when one reads Luc Steels 2000 work on language as a complex adaptive system.

By 2001 I was looking for ways to keep up with what my 12,000 business services colleagues around the world were doing. We were looking into how Etienne Wenger‘s communities of practice could play a role in the creation of new services, the codification of their process and the capture of knowledge to enable global sharing.

Like many research efforts this was a matter of falling, rising again and stumbling on. Over time it became clear that we needed to overcome two main barriers:

So in short we had started collecting narratives from around the globe, but needed some breakthroughs to put them to productive use in the organisation. 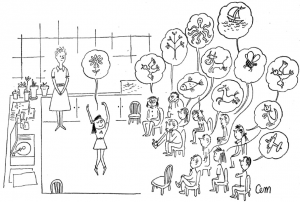 Around that same time I ran into the work of Tufte in the Océ library. In his book The Visual Display of Information  I found a picture of a girl dancing in front of a classroom, pretending she was a flower. None of her classmates seemed to interpret what she was doing. This image represents the challenge we were facing.

A confluence of rivers

Somewhere during 2004 my HR director sent me an article by Kurtz and Snowden. Despite its title The new dynamics of strategy: Sense-making in a complex and complicated world it attracted our attention because it spoke about applying complexity theory to innovation and human affairs using narrative techniques.

A year later I went to one of Cognitive Edge’s courses in London to hear more and vividly remember an introductory slide showing an early form of the Cynefin model. The words order, complicated, complex, chaos and disorder were very familiar to this chemist:

So here it was, a mapping of all the system types known in nature and mixtures thereof, and an attempt to apply that to the social domain by regarding language (and identity) as a complex adaptive system. Kurtz, Darwent, Snowden and others had brought together some things that seemed to have potential to the issues I was facing professionally and was closely connected to my scientific background. This was also right into the direction the river was taking me.

To cut a long story short, these mixed-method approaches have been the core of my work ever since then. Within Océ and as an entrepreneur from 2010 onwards, Participatory Narrative approaches of inquiry hold so much potential for o.a. marketing, innovation, change management, (systemic) intervention and – in general – improving peoples lives. I believe strongly that the application of PNI methods, combined with scientific research into PNI, will one day lead to breakthrough applications in society. Personally, that is enough motivation to join PNI2.org and join in the journey of seeking new (academic) relations in the hope that we will improve the methodology and deliver useful applications.

The estuary before the blue sea

So here we are at the start of the PNI Institute. What’s next? To be honest I don’t know, and that is a good thing. All I know is that people I had known of for a long time have become collaborators over the last year and we share a passion for fixing what’s broken, creating new things and meeting other minds in the process. For me the PNI Institute is – above all – the R&D for Participatory Narrative. A search and discover group that shares the barriers they encounter and scales them together after a while.

The current group of members is already very diverse as they come from a wide variety of backgrounds and have been in many rivers. The establishment of the Institute currently feels a bit like arriving in the estuary, the river slows down and seems calm. But the undercurrent is strong and takes us to the blue see ahead where new adventures  are waiting. I truly wish the Institute will become a meeting place to work together on the development of PNI because organisations, communities and the world at large are in dire need of better ways to understand each other and make sense of complex situations that face us.

To achieve this there are many things that can be improved and/or must be understood better in all the PNI phases and iterations. I’m pretty sure there are people elsewhere in this globe that are working on these or related things. So this Institute is meant to find them, interact with them and include the brilliant outcomes into PNI to the benefit of all. Some of them might be guest writers for a while. Others may become future members because the Institute fits them and their path in life. Personally I will also actively reach out to people at academic institutions that play a pivotal role in thinking about a more systemic and viable world.

So I guess there will be other rivers near the estuary that I/we haven’t noticed yet. Lets see what’s going to happen before the blue see offers us new challenges.