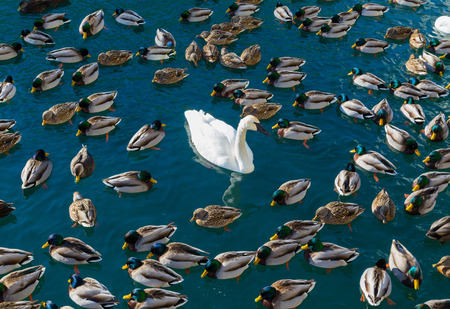 Our PNI Institute call for February was a continuation of our earlier exploration of the relationship between PNI and Narrative Inquiry. These are some notes on our fruitful discussion.

There’s another kind of proof, an experiential proof that comes from making sense of something together, of having gone through an enlightening experience together. PNI excels at building this kind of proof in situations where conclusive proof is not enough. PNI brings out the weak signals, the problem cases, the exceptions that matter, the folds in the fabric.

Often in PNI the story form (with the questions we ask about stories) is the only chance we get to engage people in participation, as they interpret their own stories. There is almost always a greater interest in telling stories than in participating in sensemaking, and it’s not just because it takes longer. People need a feeling of agency to participate in sensemaking. They need a feeling of being involved, responsible, central. If I feel peripheral to what is going on, I will be more comfortable with just telling a story. It’s only the people who feel like they are in the middle of the project that want to participate in sensemaking.

I started reading some excerpts I had marked out from the book chapters I had assigned to read. One excerpt said something about how the researcher “mediates stories into being.” We talked about how we didn’t like that, about how it makes it sound like stories don’t exist before a researcher gets to them. In PNI we assume that the stories we find were there long before we got there and that we’re tapping into a naturally flowing stream. We talked about how researchers in Narrative Inquiry sometimes have their own agendas and filters that they can’t see.

We talked about how we try to avoid placing agendas onto our PNI projects. We said that the most important way we do that is by telling the story of the project, as a thing that happened rather than a goal that was achieved. In Narrative Inquiry, the story of what happened does not matter, because you knew from the start what would happen. In PNI, you do not know from the start what will happen, so the story of what did happen is important. The proof of the pudding is in the eating, and the proof of PNI is in the story of the project.

Of course, there is a drawback to this when you try to sell PNI projects as a consultant. When you tell people that you cannot know in advance how a PNI project will play out, they don’t like that. They say either “Then you must not know what you are doing!” or “Then what do we need you for?” It takes some time to explain to people that PNI is deliberately open-ended, and that our being unable to predict exactly what will happen is a good thing.

We looked at a table of questions in the book on Narrative Inquiry (it’s on page 96 if you want to look — and if you don’t want to look, it’s still on page 96). In the table were some draft questions (written by a student of the author) and some “improved” questions (as advised by the author). The draft questions zoomed right in on “burning questions” the researcher knew people were concerned about; they were focused on experiences; they tapped into emotions; and they were of obvious practical use. The improved questions were more generic; avoided emotions; were more abstract than concrete; and didn’t address practical concerns. Essentially, we felt that the improved questions had all the fun sucked out of them. We talked about how the questions we ask in PNI “feel real” to people because they’re close to the ground of experience.

There is little doubt that PNI gets more to the heart of things than NI. This is, again, a strength and a weakness. It requires a greater degree of vulnerability from the people running and sponsoring the project. In the table we were looking at, the goals of the project were clear in the draft questions and hidden in the improved questions. Narrative Inquiry is opaque about its intentions because it thinks this will ensure a better result. PNI is transparent about its intentions for the same reason. The meaning of “a better result” is different in each case.

We made a list of things Narrative Inquiry researchers keep to themselves.

We talked about how there seems to be an attraction to performance in Narrative Inquiry. It’s almost as though NI researchers want to make a big splash with their projects, either for their careers or for advocacy. This could be because the “if it’s not on TV it’s not a story” belief has spread to infect even social science. But there are simpler reasons too. People want to get grants and good positions, so they want to tell a good story, and to do that they want to author the story and make it provocative.

If there is any facilitation in Narrative Inquiry, we agreed, it is between the stories and “the reader” — of their reports and papers. The participants (or “informants”) are just sources of data. Does the researcher care if the story sharers are still around when the research is finished? Do they want to connect the outcome of their work to the community where the story originated? In most cases, no. There is often a paternalistic attitude towards the people who tell the stories. (Maybe not in every case; but in what we’ve read of advice on how to do Narrative Inquiry, it’s pretty clear.)

This disconnect between researcher and participants is to some extent driven by language. If you just spent two years being forced to do a methods course for your Ph.D., the last thing you want to be told is to listen to people — or heaven forbid, let them have some control over the course of your project. But that is exactly what PNI asks you to do.

PNI has a different language problem. In PNI you need to learn the language used by the storytellers. You need to do that so you can translate what they say into language that those in charge — the grant makers, the research funders, the decision makers — understand. That’s something that Narrative Inquiry has built in, because NI researchers begin by speaking the language of the experts.

Of course, in PNI we always run the risk of designing something that meets the needs of the participants better than it meets the needs of those in charge. (I’ve had several projects end early for that very reason.) The PNI practitioner has to balance the needs of project funders and participants. For example, we write our story forms in the language of the participants, but there has to be some link to the language of the decision makers. These languages usually come together in the sensemaking phase. We can’t always have participants and decision makers working together during sensemaking, or even in the same room. Sometimes the stories have to mediate between the groups. But in one way or another, these two languages have to meet up for the project to work.

Somebody asked the question: When is a PNI sensemaking session a success? If everybody feels energized but you learned nothing, was that a success? The answer, we agreed, is yes and no. It’s complex. It was a success because it was what needed to happen, but more needs to happen. There’s a synergism between energy and results. More of one tends to bring more of the other, but all of one and none of the other gets you nowhere.

This is because a lot of what happens in PNI has to do with relationships. The knowledge people gain from a sensemaking session and the experience of being in the session — working with the other people in it — are not the same thing. As trust grows, in the project and the process and each other, the chance of being able to create change grows with it.

When you don’t make progress on the goal of your project during sensemaking, you probably haven’t understood the context of the project well enough. That doesn’t mean you’ve failed; it just means your design needs a tweak. You may not have been able to see that up front, but that’s how it goes.

And that’s what we said. (A lot of that is verbatim.) It was one of our best discussions! If you missed the call and would like to talk about Narrative Inquiry and PNI (perhaps to refute some of our harsher statements!), please let me (Cynthia) know. I would be more than happy to talk about this with you.