In love with SPSS

As a psychology student I was one of a kind. My favourite school subject was Methods and Design of Research, and even more rarely, the school subject SPSS (a program to do all kind of statistical calculations). We started to work with SPSS in DOS and it cost a lot of time to enter all the calculations by hand. The other students (most of whom were female) hated the work, but I found that they didn’t understand the value of doing research or having the ability to make sense of research that had been done. From that moment on I wanted to become a researcher in the social domain. I chose Social and Organizational Psychology as my main subject and did some minor programmes in Work and Health balance and Accident Research. I was ready to have a career as researcher. I started my first job as a military psychologist and was trained to become a Human Factors specialist. I did a lot of field research that included doing interviews, making sense of a situations and doing some small interventions to search for ways to change situations. I realized that I was different compared to a lot of my colleagues at that time, because I loved to listen to the stories people told me and the ones they told each other. 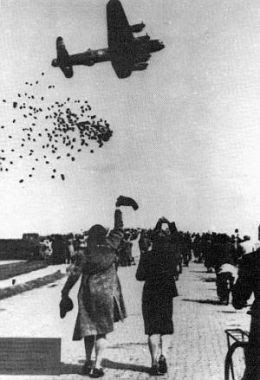 It reminded me of listening to my grandfather and grandmother talking about their experiences in the Second World War in the Netherlands. I could listen for hours to their stories and was fascinated at how every time they told the same story there were new dimensions or changes in the story. I especially liked to listen to the stories about food drops (Operation Manna) off the UK Lancasters. My grandparents even had big discussions about when I (as a small kid) asked them a lot of questions about what they did and experienced. Later I became friends with an Lancaster pilot who flew in Operation Manna. He told me his perspective of the operation which were great to listen to.

It was hard to go to mission areas, but it was the greatest work I have done so far. Sometimes we had twelve one-on-one interviews each day. The average length of the interviews I had was 45 minutes. In comparison with my colleagues (military psychologists) it was nearly twice as long. I wanted to listen what their experiences were, and how it changed their perspective on themselves, their situation and their personal development. Together we thought about what this would mean for integration in their family situation and in the life back at home. We also considered how the family had experienced this period of absence of their loved one. These interviews were so rich.

After these missions our Generals wanted to be briefed about the missions. It really frustrated me that they wanted to hear statistics. I wanted to tell them some rich stories – how people lives were changed by the things that they experienced. Some experiences were related to the mission but in a lot of cases it was not communicated. But there was no opportunity for that.

In that time I became responsible for the selection of our military pilots and other air-related jobs. This meant that I could do statistics again, doing all kinds of calculations on reliability and validity of tests! I had a great time with one colleague who also loved to do SPSS-calculations. I found another of the same rare species! I remember that we created Syntax files and that we were looking at those, telling each other how excited we were. That was really strange for our other colleagues. We optimized the whole selection chain to become one of the most successful selection chains of the world in predicting success/failure in primary flight training.

After seven years I left the Royal Airforce and worked for the Royal Military Police as a commander and later as a change manager. I worked on decision levels in the organization of Schiphol Airport. It was a dynamic environment that was focussed on security and traveller’s experiences. Finding a good balance between these two was a big challenge at Schiphol. As a change manager of a huge program (automated border control), I noticed that I did a lot of field work and some statistical work, but that it didn’t give me the information I needed. How could I know what the experiences of the changes were in the work unit of 500 young people? I searched for ways to combine the qualitative work and the quantitative work. I managed to do so on an acceptable level, but if I look back now I would have done it differently.

After I left the Ministry of Defence I searched for methods to combine these two fields of research. The Mixed Method way of researching was a way of research that I’d heard some great stories about. I realized that I am a Mixed Method Researcher. My investigation lead me to TOP Innosense. We had some great discussions about our views on research. We concluded that the central role of the researcher in field research is a strange one. Doing research on (his/her) paradigms or hypotheses is in a lot of situations not suitable. We need to listen to peoples stories and their experiences in dynamic and complex situations.

That is what I really love about Participative Narrative Inquiry. It combines all the things that are important in mining perspectives and in using the people in the field as researcher or sensors in their domain. I value being able to use this information to evaluate and make sense, together with them, of a situation and figuring ways out to improve or change a situation in a desired direction. The problem is that the applicability is enormous. We have a lot of different projects in the field of coaching, child care in hospitals, security and school social hygiene. If people ask me to tell a story about my work, it is hard to answer because the applicability is so diverse. I can talk for hours about all the great stuff we do with PNI.

I had a time when my answers were simple; „I cannot talk about that – it is secure information”. At times I still use that escape.